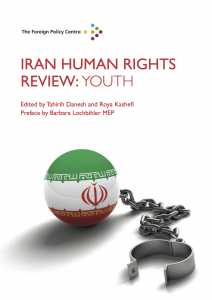 More than a century ago, Iran's Constitutional Revolution became the first movement in Asia to seek a modern social and political order centred around justice and the rule of law, inspired by a young generation engaging with the new ideologies of the modern era. A century later, the young and the educated in Iran are struggling for similar ideals while facing a new set of obstacles. In this issue, we focus on faced by young people in Iran today.

PrefaceIntroduction and Policy RecommendationsA Review of the Key Causes of Poor Performance of the Iranian EconomyAssumed Political Responsibility of the ‘Youth of Iran’A Discriminatory Educational DiscourseSubstance Abuse Among Iranian YouthA Brief on Christian Iranian YouthMarginalisation of the Kurdish YouthThe Plight of Balochi YouthYoung Women in Iran: The Tale of the OrdinaryThe Tragedy of Young Lost LivesJudicial Processes Involving Young OffendersThe Many Puzzles Thrown at Iranian Society Since 1979, Includes Sexuality, in its Many DefinitionsOur Only Nightclub for Performing is Our Website: the Internet’s Role in the Dissemination of Unofficial Rock MusicMusic, Young Women and Human RightsThe Politics of Writing and Young Authors after the Rise of the Green MovementObserving Human Rights: The Lost Link of Sports in IranA Look at Modern Spirituality and the Youth in Iran Resources